A short walk down from Kalimpong Mall is Bom Busti where we have an old Lepcha monastery. Although most of the Lepcha population around this part of West Bengal (earlier frontiers of Sikkim) have converted into Christians the monastery stands aloof in quiet solitude receiving followers on special festive and ritual days. The peeling paintings on the wooden walls look down at faith-ful faces.

Sonam Tshering Lepcha asks us to meet him in Kalimpong around Dussera. We insist that he shows us his Lepcha museum that stands on the grounds of Lepcha monastery. When the contingent meeting actually happens excitement is mutual and within a very short while Sonam comes to his usual self… a trip to the museum graced by presence of the founder himself leads to long hours of discussions about the problems confronting an indigenous Lepcha cultural history, the significance of the museum objects with respect to emerging social values and recital of different Lepcha musical instruments. 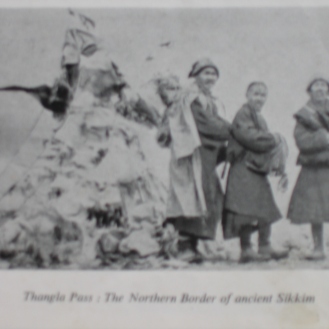 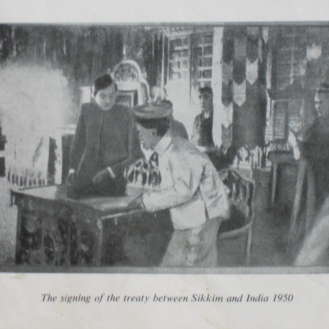 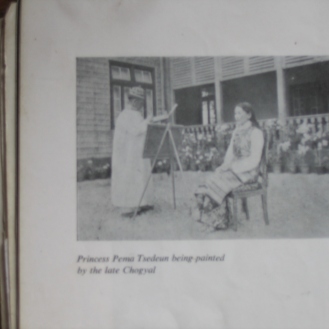 Richard Lepcha manages to take time out of his busy festive schedule for the impromptu shoot. Before that we have to knock literally every Photo Studio in Kalimpong looking for a video camera with which to capture the traces of the Lepcha domain few like Sonam care for. Finally one of them is kind enough to go out of his way and contact Richard who in turn manages to convince, on the one hand some Rehmat Sheikh to lend his Hi 8 camera, and, on the other, makes it impossible for us to ignore the Christian benevolence aspect of the whole exercise and therefore agree to shoot with it, at a price at which one can hire a couple of Digital cameras in Kolkata. Richard is a self-taught Christian Lepcha cameraperson earning his living from freelance jobs for the local cable TV networks and referring initially to Sonam as the cranky old/wise man.

Kalimpong is teeming with tourists in all shapes, sizes and mannerisms. All video cameras are working over shifts to cope with the Puja mayhem. The chowk and the bylanes are thick with Bollywood noise and burnt fuel.

We hire a car to visit the ruins of Lepcha legend Geybu Achyuk’s Doling Fort around a couple of hours drive from Kalimpong town. Sonam carries a chopper and a pack of incense sticks. Over the walk from motorable road to the ruins on top of the hill Sonam tells us anecdotes about the life and times of Doling. It is evident that what he points towards as autochthonous history stands at the crossroads of a larger migration of interlinked races fighting over resources at a time when democracy has highlighted the problematics of traditional monarchies and primitive societies alike … the subject of rule immortalizes the rule and structure under which it invents its escape from that very structure and fabricates ecstatic Utopias. Sonam talks to himself, picks a few wild wayside flowers and begins to use his chopper to clear the way once in a while… It’s a post-monsoon sunny morning over the hills spread out endlessly all around us. Most of them have similar or different stories unfolding and becoming true or false, important, indifferent or dated-ly useless. Sonam points at a heap of earth with dense overgrowth and begins to recount the architecture of Geybu Achyuk’s erstwhile fort. He talks continuously and as if he can see all of the fort right there inspite of the glaring absences of any substantive proof of the story… I remember Saul Mullard, our Tibetologist friend, smirking the first time I mentioned about Geybu Achyuk… no official historian tends to take the legends of the Lepcha hero as historic fact, yet can’t deny the importance of this set as index of a Lepcha cultural intervention in their changing socio-historic milieu under ceaseless flow of Tibetan nomad / settler(s) and rapidly becoming colonial experiences. It is for this journey to the historic site that we have taken a lot of pain to acquire a video camera on our meeting Sonam in person. Now as the camera rolls one sees nothing recorded by it but for tales of absence… nameless mounds waiting to be resurrected through a recounting of their ancient tales. But in fact, they say nothing. Sonam seeks permission from the spirits of the hill to enter the territory. While returning, we are accosted by a local tour operator who claims sole credit for immortalizing the name of Geybu Achyuk.

Sonam roams the forest of his tales, which now is Government property.

A village in the middle of non-motorable wilderness. A three hundred year old Lepcha house; its inhabitants as old as mankind.

At the museum, on our request, Sonam plays an instrument that he has re- introduced into Lepcha music. It’s a string & bow instrument that has uncanny similarities with the Sarangi…We find some clay figures that are left in the sun to be installed into the frieze of life that Sonam keeps composing to represent lost Lepcha life. He agrees, nevertheless, that unfinished and unpainted clay figures set amidst natural objects like stone, leaves, moss etc. provides a much better setting for a telling of the narratives he lives by…

A couple of hour’s drive from Kalimpong finds us at the Bhutanese Drukpa Kagyu monastery that we have been looking for. Once again, a mystic darkness, peeling paintings, monks who know so little about the religion they placate… Major. S R Bhutia, owner of the Bungalow that stands on the monastery premises, promises us all cooperation needed if we decide to shoot … interesting part of the story is that, among the Bhutanese populace staying in this part of erstwhile Sikkim, Geybu Achyuk is a malignant demon and source of a host of natural calamities and perennial illness. It is for the propitiation of such spirits that the Chaam occurs here.

The trip to Kalimpong is a major pointer for the problems of an impromptu shoot…  outside the domain of the metropolis, it seems next to impossible to access a decent camera at a reasonable price at the right moment. This makes it imperative to admit and confront that even the most casual of the recees has the potential to turn into an interesting shooting experience, once forever…mostly one plans what to shoot, it is also suggested that one engages oneself at the technical level to deal with something that is conspicuously absent, the stories of absence, for our shoot, have most often persuaded us to make invisible rooms for the contingent to play its music of chance. The economics of a film production, as ours is, allows only calculated speculations, therefore ends in capturing on film, i.e. situating as matter, images which are preempted by primarily historic notions. But dealing with realities, fat chunks of which (albeit at the surface) are actually everyday affirmations of Structure, it is perhaps customary that one allows oneself a process/processes, as importantly as thought/thoughts, that optimizes free play of chance within the obligations of overall design, as an apology for dogma… form of practical experience being the seed of the artistic form, in order to preclude the monopoly of forms prescribed by an industrial certainty…Kino Glas is an invention of the Homo Symbolicum…